Asimov would be pleased 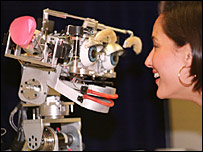 South Korea has announced that they are drawing up a code of robot ethics, to prevent humans from abusing robots, and robots from abusing humans. Asimov would be so pleased!

While it’s unclear if the code of ethics will follow Asimov’s laws of robotics (an idea their convened panelists of scientists and sci-fi authors have not ruled out), Park Hye-Young of the Ministry of Information and Communication has indicated that a major concern is that people will be interacting with their robots like spouses, or become addicted to them (as many people appear to be addicted to cyberspace in general). And according to the BBC, “key considerations would include ensuring human control over robots, protecting data acquired by robots and preventing illegal use.”

This entry was posted in Uncategorized and tagged robots. Posted by sysadmin. Bookmark the permalink.
Next → ← Previous