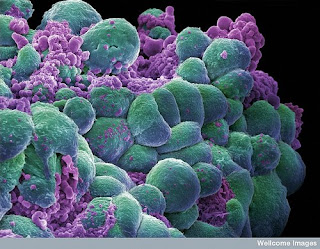 Personalized medicine is supposed to usher an era in which treatments are tailored to individuals. And HER2 testing has long been seen as heralding the promise of personalized medicine: tumors that test positive for an amplified HER2 gene are more likely to be responsive to drugs, like trastuzumab, that block the HER2 receptor.

Some may see HER2 testing as foreshadowing a perfect future in which treatment decisions are coupled to molecular diagnostics. But Gina Kolata in the New York Times instead tells a story of shadows. Like all medical tests, HER2 testing is error prone: some tumors test positive when they are in fact negative, and others test negative when they are in fact positive. And some results are just plain ambiguous, with parts of the tumor being positive and other parts being negative. Kolata describes the challenges that women and their physicians confront when interpreting test results.

Most troubling in this story is the role, or lack thereof, played by regulatory agencies like the FDA. Quoting Kolata: “there is a proliferation of laboratories offering tests without F.D.A. oversight. But, for now, the agency has no specific plan to regulate the tests, in part because of lack of money.” If FDA is not prepared to regulate tests because of resource constraints, and prescription decisions are likely to be increasingly coupled to diagnostic tests, it logically follows that FDA is not prepared to regulate the approval and use of newer generation, test-based drugs. In other words, FDA seems unable to establish the validity of labeling indications for drugs that rely on diagnostic tests. This can’t be a good thing for patients, physicians, or third party payers (but is great for the makers of drugs and diagnostics, who thrive in this kind of clinical and regulatory uncertainty!) (photo credit: crafty dame, breast cancer cells, 2009)

This entry was posted in Health Care and tagged breast cancer, diagnosis, her2, lost in translation blog, pharmacogenetics, syndicated. Posted by Jonathan Kimmelman. Bookmark the permalink.
Next → ← Previous