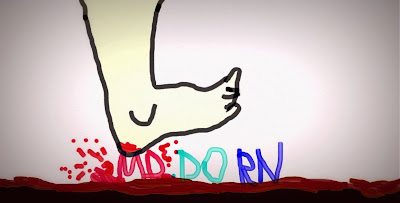 On November 27 2013, Anonymous wrote in part ” There is a culture of dismissal, negativity, and a refusal/inability to acknowledge the issue of sexual abuse within the medical community that prevails. It is this type of prevalent attitude of denial and dismissal that is so dangerous because it perpetuates the abuse.

To comment on Bernstein’s blog feels similar to what it might feel like for a Jewish person to enter Auschwitz and expect to be treated as a human being. It just is not going to happen. There is a culture of dismissal, negativity, and a refusal/inability to acknowledge the issue of sexual abuse within the medical community that prevails. It is this type of prevalent attitude of denial and dismissal that is so dangerous because it perpetuates the abuse.”

“In the 1980’s an attempt was made to estimate the lifetime prevalence of misconduct among various professional groups. A questionnaire study of psychiatrists found that 16% of responders acknowledged at least one sexual contact with a patient (Herman, Gartrell, Olarte, Feldstein & Localio – 1987).”

“Similar studies found that the frequency of self report of sexual misconduct ranged between 8% and 16%, a range that has also been found among most physician groups (Gartrell, Millikan, Goodson, Thiemann & LO – 1992).”

“During the early 1990’s, physicians in family medicine, OBGYN and psychiatry were the most common brought board attention for sexual misconduct in Oregon (Erbonn & Thomas- 1997).”

“Both forensic and questionnaire data agree that approximately 90% of offending professionals are male.”

So it would appear that this thread has changed its direction set by my visitors from discussion about the patient’s modesty issues to one of presumably wide spread medical criminality.  But is such criminality so widespread and so frequent and the consequences on patients so profound (including PTSD) that it has become a failure in the medical system and the political system not to explain to the public what is occurring and what changes in the medical system and law enforcement are going to be made to put a stop to this behavior. All we currently hear about  is providing more medical care to more of the population and the costs of medications and medical care but nothing about  the crimes in medicine except very rare news items of specific cases.  So, Hexanchus, what does your research tell you about what should be done to spread the word about medical criminality and to rein it in?  And Anonymous, what would be the solution to prevent the “denial and dismissal” attitude suggested as present in the medical profession?  Is just a general “stepping on” the medical profession with harsh words the proper approach or are there more constructive approaches to preserve a profession and skills which presumably is still needed by everybody? ..Maurice.

Graphic: “Stepping on the Medical Profession”-Created by me using ArtRage and Picasa 3.  The idea was developed from an image in Google Images.

NOTICE: AS OF TODAY DECEMBER 13, 2013  “PATIENT MODESTY: VOLUME 60” WILL BE CLOSED FOR FURTHER COMMENTS. YOU CAN CONTINUE POSTING COMMENTS ON VOLUME 61

This entry was posted in Health Care and tagged syndicated. Posted by Maurice Bernstein, M.D.. Bookmark the permalink.
Next → ← Previous