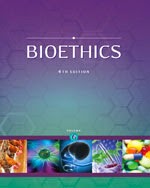 Macmillan Reference USA has just published the 4th edition of the Encyclopedia of Bioethics.  It is available in 6 volumes or by eBook.  I am pleased to have two entries included in this edition.

With its initial publication in 1978, the Encyclopedia of Bioethics became the first reference to focus solely on a then burgeoning field, in effect helping to define the discipline. The set remains the standard reference on bioethics for teachers, students, and those in related fields of health care, philosophy, environmentalism, law, and religious studies.

The fourth edition offers hundreds of revisions or addenda to entries from previous editions as well as over 100 new or rewritten entries on topics such as key cases in bioethics, the human biome, genetically modified foods, emergency preparedness and response, social justice, sustainability, chemical warfare and torture, among many others. Revised articles will explain the events as well as legislation changes of the past decade. The work is also being expanded to include views of nations and cultures other than the United States on such issues as abortion, medical triage, social responsibility, access to health care, stem cell research, etc.

This entry was posted in Health Care and tagged medical futility blog, syndicated. Posted by Thaddeus Mason Pope. Bookmark the permalink.
Next → ← Previous