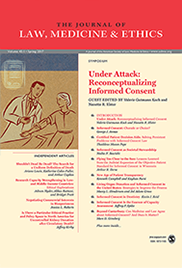 I am delighted to be a part of this just -released symposium issue (45:1) of the Journal of Law, Medicine & Ethics: “Under Attack: Reconceptualizing Informed Consent”


In 2014, the American Bar Association (ABA) Special Committee on Bioethics and the Law (“Special Committee”) sponsored a presidential showcase at the ABA Annual Meeting entitled Forging New Frontiers: The Intersection of Bioethics and Biotechnology Law. The showcase explored the bioethical and legal issues that arise with the development of cutting edge technologies, addressing genomics, stem cell research, and nanotechnology. Despite its technological focus, however, one of the most provocative statements was made about one of the most established processes in medicine and ethics – informed consent. George Annas, our first author in this special issue of JLME, stated that “informed consent is under attack.” He argued that written consent should be dispensed with when doing clinical research. Because of the ever changing nature, purpose and process of informed consent, in its current form it no longer serves the goal of protecting patients and ensuring autonomous, informed decision-making.


The physicians of ancient Greece valued conversation with their patients. Conversation, however, did not apply to slaves, whose minds and opinions did not matter. More than 2000 years later, slavery has been abolished and the law has joined ethics in setting standards for the doctor-patient relationship. The most important doctrine, in both medical ethics and health law, is the doctrine of informed consent (better termed “informed choice”), including its corollary, the right to refuse treatment. Today this doctrine is under attack. The attack is direct from business models that see genuine doctor-patient conversations as inefficient (and a waste of time), and indirect from new information technologies, especially the use of computer screens during doctor-patient encounters. Even the law has helped undermine informed choice by replacing doctor-patient conversations with legal forms.


In the landscape of American health care in the twenty-first century, individual patients’ medical decisions cannot be viewed in isolation. Each treatment decision a patient makes is situated within a broad societal context, and thus contributes to population-level trends that have an impact on all participants in the health care system. In the public health sphere, for example, individual decisions about whether to vaccinate can contribute to the resurgence of communicable diseases that were until recently considered eradicated. At a systemic level, individual decisions to pursue resource-intensive treatments can contribute to the rising societal costs of health care, higher insurance premiums, and increases in governmental expenditures on Medicare and Medicaid.


Flying Too Close to the Sun: Lessons Learned from the Judicial Expansion of the Objective Patient Standard for Informed Consent in Wisconsin
Arthur R. Derse


In the Greek myth of Icarus, Daedalus created for himself and his son, Icarus, pairs of wings with waxed feathers that could be used to fly. The father warned his son not to fly too high, close to the sun. For if he did, the hotter air would melt the waxed wings. Despite his father’s admonition, Icarus flew too high, his wings melted, and he plunged into the ocean to his death.


A patient seeks treatment for recurring back pain. The physician at the immediate care facility recommends X-ray imaging. The orthopedic physician at an outpatient clinic recommends an MRI. The pain specialist at a pain center recommends an epidural. And the spine surgeon at a large health system recommends spine surgery. Informed consent is treated by the clinicians in a cursory manner in most of these encounters (except for the spine surgeon). The patient is given some boilerplate informed consent document with little conversation (again, except for the spine surgeon). Whose responsibility is it to inform the patient of the risks, benefits and alternatives of any proposed treatment? The physicians in this scenario? Or the health care organization? Moreover, should other information be shared with the patient (e.g., outcomes data, quality data)? Who should share this information? The physician? The organization? Both?


More than 120,000 individuals in the United States are currently waiting for a lifealtering solid organ transplant, but usable organs from deceased donors are scarce. As the need for organs has outpaced availability, wait times have increased, particularly in certain geographic regions. Living donor transplantation, offered in some form by most U.S. transplant centers, represents one major strategy for addressing patients’ needs amidst this scarcity. Living kidney donation now accounts for approximately one third of all kidney transplants occurring in the U.S. annually. Living donors are comparatively healthy individuals who voluntarily undergo resective surgery to aid a family member, friend, or stranger without any direct physiological benefit to the donor. Typically, the donated organ is a kidney (leaving the donor with a single kidney) or part of the liver (which is capable of regeneration). Informed consent is a critical aspect of living organ donation, as safeguarding the individual donor is a central tenet of safe clinical practice, and protecting the donor’s autonomy is a major legal and ethical concern.


Though this account of informed consent will not address informed consent in the research setting, a brief historical reference to research ethics is necessary to gain some perspective of the development of clinically related informed consent. The crux of the theory of informed consent is respecting the ethical right of an individual to make decisions about his body and whether to have it acted upon – in any way – and only with his authorization and in the absence of undue influence. This right was influenced by revelations about research atrocities conducted during World War II wherein people were subjected to medical experiments without choice. Among these atrocities were the tragic experiments of Josef Mengele in Nazi Germany, which are perhaps most widely known and which gave rise to the Nuremberg Trials in 1946. These highlighted the criminal imposition of medical experimentation on Jews destined for execution. The Nuremberg Code emerged from the trials and included ten principles for morally sanctioned experimentation, the most important of which was that people have the ethical and legal right to freely consent to, or refuse participation in, medical experimentation, though it is important to emphasize that this code has never been adopted as law in the United States. Following the Nuremberg Code, the practice of informed consent in non-experimental, clinical settings evolved having clearly been influenced by the elements of the Nuremberg Code.


Informed consent is the single most important concept for understanding decision-making capacity (abbreviated DMC in some articles, but abbreviated “capacity” for the rest of this article). There is a steady pull in the clinical world to transform capacity into a technical concept that can be tested objectively, usually by calling for a psychiatric consult. In this article I argue that is a mistake, not just unnecessary but wrong, and explain how to re-normalize capacity assessment. The argument is based on ethical, philosophical, and clinical perspectives.


Beyond Canterbury: Can Medicine and Law Agree about Informed Consent? And Does It Matter?
Marc D. Ginsberg


For those of us whose scholarship focuses on medico-legal jurisprudence, the law of informed consent is a gift. It has been a fertile topic of discussion for decades, with no end in sight. Although it is not difficult to acknowledge that patient autonomy is at the core of informed consent, the doctrine is not static – it has evolved in scope and continues to engage courts in thought provoking analysis.