Should Religious Homophobia be a Firing Offence?

It looks as if Isreal Folau will lose his job as a professional rugby player for expressing his apparently genuine religious belief that drunks, homosexuals, adulterers, liars, fornicators, thieves, atheists, and idolators are all going to hell. Morgan Begg, a research fellow at the Australian conservative think-tank, the Institute of Public Affairs, has recently argued that this is the result of a “totalitarian” and “authoritarian desire to impose ideological orthodoxy on Australians.” I respond that it is, in fact, Begg’s ideological position that is more amenable to totalitarianism and authoritarianism.

Begg claims that freedom of expression should include the right to express sentiments that “many people would profoundly disagree with” and find “deeply offensive”. It is the right of those who are outraged by Folau’s opinion to disagree with him but to ban him from expressing it, Begg claims, is totalitarian. Worse still, this “outraged mob” includes a powerful corporate entity, Qantas. Q 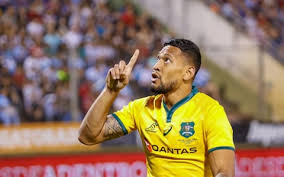 antas is Australia’s national carrier and a major sponsor of the Wallabies, Australia’s national rugby team. Qantas released a statement that, we may assume, is a thinly veiled threat to withdraw sponsorship, which said that Folau’s comments “are really disappointing and clearly don’t reflect the spirit of inclusion and diversity that we support.” For Begg, this too expresses an “authoritarian desire to impose ideological orthodoxy on Australians… While Qantas says it believes in diversity, it doesn’t believe in the right of someone to express a religious viewpoint.”

Begg’s view can be summed up as follows: We should not limit freedom of expression just because some such expressions offend some people. If we do, we will quickly find that there is very little we are free to express.

Begg and I can at least agree on three general points – outrage alone doesn’t settle anything because outrage can be unjustified; it would be bad if we were all forced to share the same narrow ideology; and, we should be concerned about corporate influence overshadowing the interests of individual citizens.

The core of our disagreement is over whether Folau has done something wrong, such that the outrage or prospect of losing his job are at least potentially justified. Begg appears to think that Folau has not actually done anything wrong, so the outrage is unjustified and so too are any knock-on measures to deter such self-expression. Or perhaps Begg would grant that Folau’s actions were blameworthy to some extent, but claim that this cannot justify strong sanctions that would seriously stifle freedom of expression. But if, as I think, Folau has done something seriously wrong, then not only may the outrage be justified, but so too may be some sanction to deter and punish such wrongdoing.

So, what has Folau done wrong? The view he promoted on his social media account implies that homosexual people cannot be respected as moral equals. By the mere fact of being homosexual they are, according to Folau, in the same category as liars and thieves. Perhaps a more charitable interpretation of Folau is that it is fine to be homosexual—that is, to have a same-sex sexual orientation—but to act on such desires is immoral, akin to lying and stealing. This, at least, would mean that those with a homosexual orientation have a chance to change their ways and avoid hell. To be forgiven they would presumably need to do what liars and thieves must do: acknowledge their error and receive some punishment or pay some compensation. Only then can they be welcomed back into the fold as moral equals worthy of respect.

But is it morally wrong to act on homosexual desires? So long as the behavior is consensual, there is no evidence that it harms the participants, bystanders, or society more generally. By contrast, the freedom to express one’s sexual natural in a consensual way brings significant benefits to most people, whether homosexual or otherwise.

There is more to morality than benefits and risks. But the reason for believing that homosexual acts are wrong is often based purely on contested interpretations of a religious text. I assume this is the case for Folau. The problem with this approach is that, to people outside that religion, these reasons have no normative force; they are an arbitrary way to define right from wrong. To expect others outside your religion to conform to your standards—without providing reasons that are not religion-specific—is to fail to treat them as free and equal. Your demands amount to mere foot-stamping: an unjustified attempt at coercion.

In a liberal democracy, the system of justice must be decided upon using reasons that every citizen can understand (i.e. Rawlsian public reason). Among other reasons, this is so that those who are punished in the system can at least understand the reasons for which they were punished and not take themselves to be the victims of arbitrary power.

As Begg sees it, however, the arbitrary power in this case is being enacted against Folau. But is it authoritarian or totalitarian to coerce people into treating others as free and equal? Quite the opposite. Treating others as free an equal is a cornerstone of liberal democracy. A robust liberal democracy therefore needs to protect its citizens’ moral status as free and equal using effective sanctions against those who undermine the principle. To fail to defend that principle and allow a free speech free-for-all might appear to be a libertarian utopia but it allows those who happen to wield the most power to undermine the moral status of weaker groups should they feel like it.

But, one might wonder, why would the strongest want to undermine the moral status of minorities? Well, in that kind of society, there is a reward structure that breeds authoritarianism because if you happen to be the strongest and aren’t prepared to impose your control on others to some extent, you risk losing your spot at the top to more aggressive minorities who may then expose you to arbitrary power.

In other words, liberal democracies can justify exerting some coercive pressure on its citizens so that they treat each other as free and equal because there is massive payoff in ideological freedom for the minorities (such as Pacific islanders living in Australia). Far from being authoritarian, insisting that we all treat each other as free and equal is how we protect society from becoming authoritarian.

But if we have established that outrage at Folau and a sanction are both justified in the name of a healthy liberal democracy, that still leaves questions about the type or size of sanction and who should impose it. It could be that losing one’s job is a disproportionate price to pay. Settling this is a complex issue. One consideration is that the size of the sanction should be proportional to the harm done and this depends on the vulnerability of the group harmed and the reach and influence of the perpetrator.

Certainly the homosexual population is vulnerable due to historic and ongoing homophobia. Self-respect is essential for good mental health and depends on being respected by others. In a context where you are already unsure if you are worthy of respect it is particularly harmful to see someone in a position of power suggest that you are not (e.g. see the study done during the Australian plebiscite on marriage equality and this personal account from Jason Ball). Furthermore, Folau’s words embolden other homophobic people to perpetrate further harm, both psychological and physical, against homosexual people. We can say, therefore, that Folau’s attack on homosexual people is worthy of greater sanction than his attack on atheists and fornicators, two less vulnerable populations in the Australian context.

Folau’s has significant power to cause harm (and do good) with his words. He is famous with many followers on his social media accounts so his words and influence travel far. Therefore, his homophobic posts on social media should face greater sanction than a relatively anonymous person who posted the same thing. His posts should also attract a greater sanction than if he expressed the same view in person on the street to a couple of strangers (assuming he had good reason to believe that it wouldn’t be recorded and disseminated).

Another consideration is whether there is something Folau could do to right his wrong. If he were to, say, show remorse and become an effective ambassador to counteract homophobia in the community perhaps that would be enough and he could keep his job. But if he refuses to make sufficient amends then firing him might be the best way to make up for some of the harm he has done. This is because firing him sends a clear message that even nationally recognized rugby players are not allowed to undermine the moral status of vulnerable minorities without serious cost.

Finally, there is the question of who should impose the sanction. If the justification of the sanction is the protection of liberal democracy then, intuitively, it seems that it should fall to the state. There are hate speech laws in Australia but they vary by state and are cumbersome to apply. Rugby Australia seems like the best entity to impose a sanction. They are the governing body for rugby in Australia and so they are the appropriate authority to ensure the basic standards of liberal democracy extend into the realm of rugby. Of course, it also helps that they have a contract with Folau which means they have a powerful tool to impose sanction.

What about the intervention from Qantas? Is Qantas wrongfully wielding its financial power to coerce Rugby Australia? It so happens that Qantas’ actions here align with protecting the moral status of a minority group and they thus support liberal democracy. I have already outlined how some limitations on freedom of expression can be justified on these grounds.  So is there any problem here? Well we may wonder about the intentions of Qantas, what if their actions were purely motivated by profit and not at all by concerns for liberal democracy and the moral status of minorities? Begg thinks it must be all about the money for Qantas because why else would they be willing to partner with Qatar Airways and Emirates, who are “owned and operated by repressive regimes the United Arab Emirates, and Qatar respectively. Qatar imprisons those deemed guilty of homosexual acts, and the UAE punishes homosexuality with the death penalty.”

If corporate entities like Qantas are purely interested in money, then occasionally they might coincidentally act in ways that are morally good but more often than not they will act in ways that promote the interests of a relatively small group of shareholders at the expense of the public. For this reason, we need ways of regulating corporations. I can’t get into how best to do that here but ideally there would be a way of allowing corporate influence when it was in the best interests of the public and restricting it when it wasn’t.

As a final note, I don’t think it’s clear that Qantas were hypocritical in their intervention regarding Folau. Commercial aviation is highly competitive, and it may be that Qantas would have failed as a business if it didn’t partner with Qatar and Emirates. One way to justify the apparent hypocrisy would be to argue that a company shouldn’t destroy itself over a moral position (with all the costs that entails) when it can live to fight another day and continue to work for morally good outcomes.