This week the legal case around medical treatment for five-year old Tafida Raqeeb has begun in the High Court. She sustained severe brain damage from bleeding in the brain seven months ago. Her parents wish to take her to a hospital in Italy for further treatment, while the doctors at the London hospital caring for her believe that it would be best to stop life support and allow Tafida to die.

In a previous press release, I addressed several common questions about the case:

There appear to be two central questions in her case –

The first of these questions is a medical or scientific question. There appear to be different views about whether Tafida’s condition might improve with the passage of time. Tafida’s parents believe that they have seen signs of improvement. The Royal Bart’s hospital doctors believe that further treatment would not lead to any benefit for Tafida.

Where there are different medical opinions, it is important to look at the expertise of those who are providing them, and the evidence that they are using to come to their opinion. (In the Charlie Gard case, one central issue was that the overseas doctor providing an opinion had never examined Charlie. This was one reason given in court for placing less weight on his view about Charlie’s situation). There may be different views internationally on medical questions because people have different experience, or use different treatment techniques. It is difficult for outside observers to comment on this medical question, since it is very dependent on the specific details of Tafida’s condition. As noted in the previous press release, one of the challenges in commenting on Tafida’s case is that there is limited information about Tafida’s medical condition that is publicly available.

Importantly, it now seems clear that the doctors in Italy are not offering any new treatment or different treatment. Vikram Sachdeva, one of the lawyers representing Tafida, has apparently indicated that the Gaslini hospital is not offering experimental treatment (as was the case for Charlie Gard), rather that they would continue life support as long as Tafida was not ‘brain dead’.

The second question above is an ethical question, not a scientific question. Indeed, it seems that this is the main question at the heart of the case.

There can be different views internationally about what to do in very sad cases like that of Tafida Raqeeb, Charlie Gard or Alfie Evans. In some countries life support might be continued indefinitely for patients who with profound brain damage, even if there is no chance of improvement. In other countries, like the UK, there is a feeling that this is sometimes the wrong thing to do – treatment may prolong life, but may be doing more harm than good. Why are there these international differences?

One difference is that some countries place more emphasis on the importance of ‘quantity of life’ – reasoning that it is always better to keep someone alive longer. Other countries place more emphasis on ‘quality of life’ – reasoning that sometimes it may not be best for a patient to keep them alive, where their quality of life is very low. The UK courts have always emphasised the ‘sanctity of life’ principle – but have also considered that in some situations it is not in a patient’s best interests to have life-prolonging medical treatment.

Finally, one important difference between countries arises from the use of limited medical resources. There are only a finite number of specialist intensive care beds in health systems like the NHS. Prolonged use of an intensive care bed may mean that another child is unable to be admitted to intensive care. (For example, surgery may need to be cancelled, or they may need to be transferred to a hospital far from their home). In situations where a child has an extremely low chance of ever recovering to benefit from that treatment, prolonged intensive care may be ethically difficult to justify. Those sorts of concern can be very different in health systems that are privately funded, though even in those systems, resources are not infinite.

It is interesting to know that there are different ethical views internationally about what to do in cases like that of Tafida Raqeeb. It is important for both doctors and courts to carefully consider these alternative perspectives, and to assess whether there is reasonable disagreement about what would be best for the child.

If there is a genuine prospect of Tafida improving, and she is not suffering from being kept alive artificially in intensive care, it would be the right thing to do to transfer her to the hospital in Italy.

However, it also seems quite possible that continued life support would offer no benefit to Tafida, and may be causing her to suffer. If that is that case, it would be wrong to transfer her overseas. As noted by Katie Gollop, (one of the lawyers representing the trust): “If it is not in her [Tafida’s] best interests in London, it is not in her best interests in Cornwall, Leeds, America, Rome or Canada or anywhere else.”

Dominic Wilkinson is the co-author with Julian Savulescu of ‘Ethics, Conflict and Medical Treatment for children’, published by Elsevier in 2018 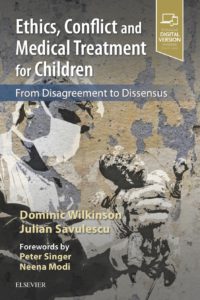 The outline of the book is copied below

What should happen when doctors and parents disagree about what would be best for a child? When should courts become involved? Should life support be stopped against parents’ wishes? The case of Charlie Gard, reached global attention in 2017. It led to widespread debate about the ethics of disagreements between doctors and parents, about the place of the law in such disputes, and about the variation in approach between different parts of the world. In this book, medical ethicists Dominic Wilkinson and Julian Savulescu critically examine the ethical questions at the heart of disputes about medical treatment for children. They use the Gard case as a springboard to a wider discussion about the rights of parents, the harms of treatment, and the vital issue of limited resources. They discuss other prominent UK and international cases of disagreement and conflict. From opposite sides of the debate Wilkinson and Savulescu provocatively outline the strongest arguments in favour of and against treatment. They analyse some of the distinctive and challenging features of treatment disputes in the 21st century and argue that disagreement about controversial ethical questions is both inevitable and desirable. They outline a series of lessons from the Gard case and propose a radical new “dissensus” framework for future cases of disagreement.

Full-text of the book is available (open access) here