Several TV medical shows were sunsetting, and two showrunners were interested in acquiring my book 12 Patients: Life and Death at Bellevue Hospital; both mentioned a sense of urgency in producing a show that highlighted the commitment to caring for other human beings. 12 Patients, bought by NBC-Universal, drew from my 15 years as the medical director at Bellevue Hospital, both the teaching hospital of the New York University Medical School and the crown jewel of the largest public hospital system in the country. I had kept meticulous notebooks about the political,

Image is a referral from Eric Manheimer’s webpage

economic, and social issues that impact health. These issues were refracted through the details and stories of hundreds of patients and their families seeking care and solace from a globe under toxic stress. I would be both a writer and a producer for the TV series New Amsterdam based on 12 Patientsthat aired in the fall of 2018 and is now beginning its second season.

The sense of urgency increased logarithmically post-election and tracked closely to the topics I had addressed and others I had held in hand for another day.

While most TV shows hew to medical conundrums and the drama between a key doctor (or a Nurse Jackie) and other physicians and key staff, New Amsterdam chose to focus on the underlying social structural issues that are the primary drivers (the cause of causes) of the nation’s medical “problems.” These “social determinants of health”—poverty, lack of health care, immigration status—have largely been ignored both by the current nearly $4 trillion delivery system and television. The system, which is a key protagonist without a name in virtually all of the TV medical shows, is increasingly being called out for not delivering what it has promised (i.e., health and well-being for Americans) at the same time it saps vital resources, exacerbating the very health it purports to be fostering.

New Amsterdam was interested in the underlying core issues as drivers of the dramatic tension in a medical TV series. The delivery system itself, doctors, hospitals, insurers, device makers, Big Pharma, lawyers, advocacy groups, and lobbyists became part of the drama. Since health care is not considered a right by the U.S. government, tens of millions of Americans go without insurance and proper health care, causing well-documented premature disease, death, and financial catastrophe. The waste, fraud, and abuse (i.e., overtreatment, overtesting, overprescribing), come together with the lack of effective feedback loops to remove unproven therapies and those proven to be of no value (medical reversals). If unicorn therapies (billion-dollar drugs) are part of the equation of care, then foundational ethical questions become pressing: Who will get that care and who will not? Ethical issues pertaining to inequality and human rights clearly impact health and mortality.

A medical series lives in the moment and reflects that moment. We bring “pitches” to the table that cover the broadest range of underlying themes that animate our patients’ medical stories, our own lives, and the broadest social webs of our society. In New Amsterdam we mine the deep experiences of real patients. End-of-life care, euthanasia, “deaths of despair”, loneliness, depression, and gun violence (suicide by white males) are on the white board in the writer’s room. The deep and painful issues of racism, the toxic exposure to violence plaguing women, children, and men, sexism, ageism, and the neglect of children all have varied permutations and presentations in clinics and emergency rooms. Here the syndromes are translated from the social, economic, and political into a medical diagnosis and treatment plans. The erasure of the context in TV depictions usually casts the crisis as a failure of personal responsibility. In New Amsterdam, we aimed to connect the dots, linking illness to social malpractice.

The medical staff is not immune to pain and tragedy and the main protagonists all succumb to their human imperfections at some point. In New Amsterdam the main character is diagnosed with throat cancer early in season one. The disease has effects far beyond Max Goodwin, effects that ricochet and touch everyone around him. 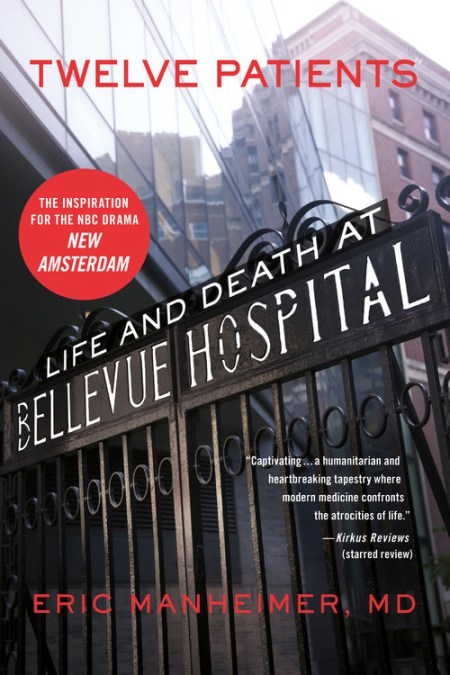 Image is a referral from the book’s publisher, Grand Central Publishing

In one episode, Floyd Reynolds, the Chief of Cardiovascular Surgery, is running a morbidity and mortality (M & M) conference to present a case in which a New York Police Department (NYPD) cop was shot and died. The case was carefully reviewed and presented to an internal medical audience. The internal review mechanism is a learning experience, seeking to understand what happened and whether improvements might be made going forward. Max cross-examines Reynolds with undisguised hostility and publicly shames him. This was the “old” shame method of an M & M when I was in training and is always in tension with the updated version that focuses on learning from mistakes. Reynolds was facing the existential crisis in medicine: I did everything right and it did not matter. The patient died. Max crossed the line. There is no role for public shaming since it breeds coverups and hides errors. An ethically messy area tainted by hierarchy and the thin “white line.” This scenario is happening with infinite variations in every hospital every day. Was Max’s tumor or treatment talking? Was this an individual failure? A systems issue? An act of God?

In the same episode, Iggy Frome, the head of psychiatry, had been treating a complex adolescent with outbreaks of violence. He is seen hugging the teenager, by a visiting social worker who writes him up for unprofessional behavior and violating professional norms. Iggy’s entire approach to treatment is based on demonstrating emotional warmth and honesty. Is a hug a line crossed? The broader context was California’s false memory scandal in day care, where many providers were wrongly accused and sentenced to prison. The country recoiled, embracing a no-touch approach. Iggy is vindicated but undermined. He feels he has done wrong. Now he has a long road to regain his therapeutic self. What are the stakes here? What social panic and contagion is at play? Touch and emotions are reentering psychiatry and medicine more generally after a long hiatus. Are we ever free of history? How much fear do we live in our daily lives that is magnified by media? What are the consequences?

The writer’s challenge is contextualizing and adding nuance to core issues in episodic time slots while preserving the public’s interest in the characters and dramatic situation. We see a patient in diabetic ketoacidosis in the emergency room who has been titrating down their insulin dose to make it last. If insulin costs so much that a large number of patients cannot afford the medicine, is the problem the profit margin of Big Pharma or the takeover of the regulatory controls of government by corporate interests? What does insulin really cost? What does it cost in France? In Canada? And why? This is an everyday occurrence in U.S. hospitals and a canary indicator of a system hewing to a financial model that is ethically at odds with its core moral pillar. Primum no nocere. First, do no harm. It’s become easy to shift blame from failures in the system to the patient’s “inability” to comply. A core component of the deep division in American values is reflected in our political and economic life: individual responsibility versus community and government responsibility.

The ethical dilemmas flow naturally from every contact point and every point of view. While all hospitals have an ethics committee to assist in adjudicating complex ethical situations, there is not a day where medical personnel are not confronted with compelling, nuanced challenges that test their training, their mentorship, and their values. From a writer and producer point of view they are all on the white board. Everything is discussible. But not everything has an answer. There is virtually no censorship. The series carefully plots out the dramatization of socially polarized issues. What gives the writers and producers on the TV show their power is the most ancient of all power, the power of the story. Storytelling and the narrative arc become the tools of consolidation of maximum human complexity into drama. Through speech and action, the drama elicits the emotional reactions of vast audiences who are linked to the “hero” and the various characters. Audiences who have felt the bite of shame, who root for the underdog, who can smell rapacity covered with a suit and tie and white shiny teeth, who fear death.

The medical TV show has changed radically since the 1960s to the mid 1990s, when they were overseen by the American Medical Association. From the carefully groomed and presented white male doctor in his position of power and authority, ER (1994) moved toward as accurate a representation of reality from the medical point of view as technically possible. Physician writers, producers, and consultants contributed to and created this shift. At the same time, they rejected outright the “reality” medical show with cameras following real patients into emergency rooms and hospitals. One was an honest representation of reality. The other was an ethical breach with far-reaching implications.

The degradation of the current clinical encounter, into now shorter visits mandated by the massive shift to corporate owners and insurance brokers “the business of medicine is business,” and the intrusive electronic health record (EHR), has fostered a flourishing return to storytelling and narratives to understand more about patients and how to care for them. Not through artificial intelligence (AI), but through recapturing the practice of listening with attention and respect. These cases become dramatic material to show the inner workings of medicine through the eyes of a group of providers and patients in an attempt to bring care and caring back into health care, countering the side effects of the dominant corporate medical business model. “How can I help?” is the foundational trope for the series. It asks the key question for any and all patients; it provides no preemptive answer and it lays open the opportunity for an infinite level of patients’ responses from every cultural background, age, sex, gender, class, and prior experience.

Click here to see the latest bioethics in New Amsterdam which premiered it’s second season this week. To read more about bioethics in television, be sure to read our weekly BioethicsTV column, exploring moral issues in medical dramas.