In 1953 Alice Neel created a series of ink and gouache drawings depicting the last weeks of her mother’s life, which were spent in a New York city hospital.


In this drawing, a black nurse comforts a prone elderly lady. The pale hues of the painting–blue, black, white–evoke a somber mood and imply sickness. This sense of despair is augmented by a harsh cityscape background beyond a dark river, which the viewer sees through a window.


Compassion counters these desolate surroundings, however, for a bond is apparent between the nurse and elderly patient. The nurse’s hands rest on the patient in a partial cradling gesture, and the trajectory of the lines made by the nurse’s arms and hands and the elderly patient’s flowing hair establishes a visual and emotional link. The connection between the two figures is supplemented by the thin smiles on both women’s faces. 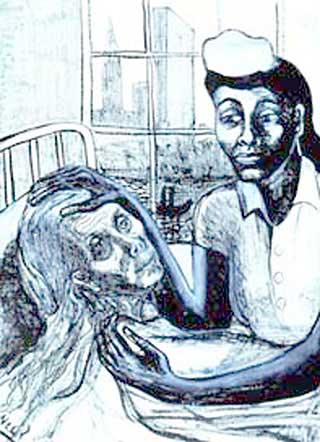 This entry was posted in Health Care and tagged medical futility blog, syndicated. Posted by Thaddeus Mason Pope. Bookmark the permalink.
Next → ← Previous