Since 2009 Caster Semenya has been the face of hyperandrogenism in women’s sports and today her case is back in the headlines. Hyperandrogenism is when women have high levels of hormones like testosterone. Because of high levels of testosterone, Semenya, a South African, Olympic champion runner has been at war with the International Association of Athletics Federations (IAAF) over her ability to participate in some of women’s international races like the Olympic games. To participate in races Semenya was required to undergo hormone treatment to lower her hormone levels. For future cases involving women athletes with hyperandrogenism the IAAF created policies that mandated women athletes must meet new testosterone levels of no greater than 10nmol/L to compete against women. Although Semenya’s running was affected by her lower testosterone levels, she still continued to win races including those in the London Olympics in 2012 and the Rio Olympics in 2016.

In 2018, the IAAF announced new regulations mandating that women’s testosterone levels be no greater than 5nmol/L, a change from its 2011 regulated level of no greater than 10nmol/L. Samenya challenged this new ruling in February of this year, however, today she lost her case. The Court of Arbitration in Sport (CAS) rejected her challenge of the new IAAF rule. This loss means that if Samenya and athletes with differences of sexual development (DSD) want to continue to compete in international races they will have to take drugs that lower their testosterone. 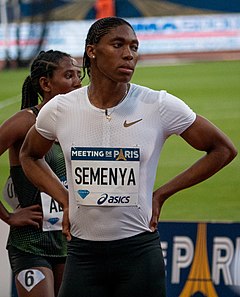 Even though CAS recognized that regulating the hormone levels of athletes with DSD is discriminatory, it ruled the discrimination “’necessary, reasonable and proportionate’ to protect ‘the integrity of female athletics.” CAS expressed multiple concerns about athletes complying with the rules, but did not express concerns for what this ruling means for the bodies of athletes like Samenya and what this ruling means for how we view the nature of sport and victory for all athletes, regardless of testosterone levels or gender.

Samenya’s fight with the IAAF is ultimately a fight to compete without drugs. A part of what makes this story extraordinary is that it is very different than the stories of drugs in sports we normally hear in the news. Other than Indian athletes with DSD, who similar to Samenya have fought to compete, normal drugs-in-sports stories are about sports’ governing bodies trying to keep drugs out of competition. It is far more invasive and paternalistic to tell athletes like Samenya to ingest drugs than to tell athletes like Lance Armstrong to refrain from taking drugs. Additionally, no drug is without side effects. By requiring Samenya to take drugs to compete she is put in the impossible situation of having to choose between competing in races or taking drugs and accepting their possible consequences in order to compete. This ruling by the CAS gives governing bodies like the IAAF too much control over the bodies of athletes, particularly bodies that they have deemed problematic.

The ruling against Samenya’s challenge to the IAAF’s testosterone regulation sends the message that her natural body is not suitable to compete against women and that other women athletes’ chance at victory must be protected from the feats of her natural body. Samenya’s loss in court sends the message that she is not a woman because there is a certain way to be a man and a certain way to be a woman and her natural body muddles this distinction. In this case the CAS has defined “woman” as having testosterone levels below 5nmol/L. With one regulation and with one court case the CAS and IAAF have strengthened the link between biological sex and social constructions of gender that physicians, scholars, and activists have worked hard to deny.

Samenya’s loss in court is also troubling because it shows that the IAAF places much more importance on biology than on skill and effort. An athlete does not get to compete at the Olympic level by simply having the right genes or biological make-up. Yes, a genetic predisposition for the skills that athletic competition requires can help athletes win but if they do not cultivate their talents, train hard, work with the right coaches, eat the right foods, and practice, their biological make-up will not be enough to win. But this court case ignores Samenya’s hard work and focuses on the possible advantages her hormone levels give her, despite her winning races even when her testosterone levels were lowered.

Lastly, I want to recall a popular story circulating on the web about professional swimmer Michael Phelps during the height of his career. As the story goes, Phelps body was made for swimming. His ability to hyperextend his joints, his size fourteen feet and possibly double-jointed ankles, his torso length that is disproportionate to the rest of his body, his shorter legs, and his naturally lower production of lactic acid, which is known to increase the speed of recovery is all natural and gives him an advantage over his opponents. There is even some reason to believe that his naturally occurring, exceptional, and abnormal wingspan helped him win a race in the Beijing Olympics in 2008.

Despite all of Phelps physical advantages, his coaches still believe its Phelps drive and work ethic that to date helped him become one of the most decorated swimmers. Like Samenya, we have acknowledged that Phelps natural body gives him an advantage in competition. But unlike Samenya, governing bodies do not require Phelps to change his body to compete. He does not have to use medical intervention to lengthen his legs or shorten his feet. But unlike Samenya we acknowledge that it’s Phelps efforts that are primarily responsible for his wins. The targeting of athletes with differences of sexual development is another disparity that women athletes, particularly women athletes of color have to confront just to get a chance to compete.