For three years during the 1960s, I worked for various organizations, all of us trying to end the War in Vietnam.  At one point, I was employed by the Fifth Avenue Peace Parade Committee, while my boyfriend worked for the Student Mobilization to End the War in Vietnam (affectionately known as “The Mobe”).  Both of … Continue reading Coronavirus Contact Tracing

Check out this course at Cardiff University. It explores how (un)consciousness, coma and the vegetative state are represented in the media.

This course allows you to engage with debates about the portrayal of patients and reporting of  ‘miracle’ recoveries, court cases and scientific breakthroughs. It addresses implications for family and public understandings. This course will help develop your understanding of ‘coma’ and your skills in writing for the media or being a critical media consumer or researcher, or supporting patients and their families.

I like this page which includes interviews and commentaries on key cases like Nancy Cruzan, Aruna Shanbaug, an Eluana Englaro. 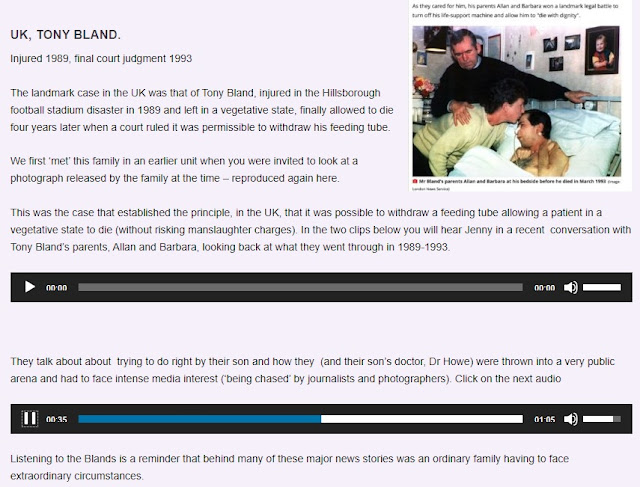 Full Article
This entry was posted in Health Care and tagged syndicated. Posted by sysadmin. Bookmark the permalink.
July 8, 2020 Ethicists as a Force for Institutional Change and Policies to Promote Equality
Bioethics.net Blog

In his recent JAMA article, Donald Berwick eloquently describes what he termed the “moral determinants of health,” by which he meant a strong sense of social solidarity in which people in the United States would “depend on each other for securing the basic circumstances of healthy lives,” reflecting a “moral law within.” Berwick’s work should serve as a call to action for bioethicists and clinical ethicists to consider what they can do to be forces of broad moral change in their institutions.

The post Ethicists as a Force for Institutional Change and Policies to Promote Equality appeared first on The Hastings Center.

I’m re-reading Black Skin, White Masks as part of a “remember your critical theory so that you can defend it or critique it from a place of knowledge rather than memory” sort of process. I’m alternating between the 2020 best sellers and the critical canon. Between the World and Me was first, now Fanon (going [...]

This month, the Society for Post-Acute and Long-Term Care Medicine (AMDA) became the first national organization to formally endorse and support the adoption of a national POLST form.

The national form was created because a single form—as opposed to just state-to-state form reciprocity—will make it easier, among other things:

“POLST exists to provide seriously ill or frail patients a tool to communicate their treatment preferences as they transition across care settings or travel throughout the United States.” (Amy Vandenbroucke, JD, executive director of National POLST).

POLST is an approach to advance care planning for patients who are considered to be at risk for a life-threatening clinical event because they have a serious life-limiting medical condition, which may include advanced frailty. The POLST process emphasizes eliciting, documenting, and honoring patient preferences about the treatments they want to receive during a medical emergency or as they decline in health. These treatment wishes are documented on a portable medical order called a POLST form.

Full Article
This entry was posted in Health Care and tagged syndicated. Posted by sysadmin. Bookmark the permalink.
July 6, 2020 Using the Pandemic as an Excuse to Limit Abortion
Bioethics.net Blog

Several states, including Ohio, Alabama, Arkansas, Texas, Iowa, and Oklahoma, declared abortion a nonessential service at some point during the pandemic, meaning that it was effectively banned until the crisis passed. Supporters of the policies maintain that abortion is an elective procedure whose medical resources are better off used in the fight against the pandemic. But abortion opponents have been taking advantage of the current circumstances to limit abortion access.

The post Using the Pandemic as an Excuse to Limit Abortion appeared first on The Hastings Center.

The Washington Post has compelling coverage  of the Austin, Texas case in which clinicians withdrew life-sustaining treatment from Michael Hickson over the objections of his wife and apparently on the basis of his unrelated disabilities. Yet, per...

The Washington Post has compelling coverage  of the Austin, Texas case in which clinicians withdrew life-sustaining treatment from Michael Hickson over the objections of his wife and apparently on the basis of his unrelated disabilities. Yet, per...

A growing number of states have enacted Simon's Law over the past four years (e.g. AZ, KS, MO). They take different forms. Some require only that parents be informed that clinicians plan to write a DNR order for a child. Others prohibit writing the ord...

A growing number of states have enacted Simon's Law over the past four years (e.g. AZ, KS, MO). They take different forms. Some require only that parents be informed that clinicians plan to write a DNR order for a child. Others prohibit writing the ord...

Full Article
This entry was posted in Health Care and tagged syndicated. Posted by sysadmin. Bookmark the permalink.

We Have Met AI, and It Is Not Us
Paul Root Wolpe
Full Article

Beneficence, Interests, and Wellbeing in Medicine: What It Means to Provide Benefit to Patients
Johan Christiaan Bester
Full Article

The United States leads the world in coronavirus cases and deaths. Although many people have called out the inadequacies of our health care system, Covid-19 has exposed the most significant shortcomings. The need for change can no longer be ignored. Here are three lessons from this pandemic that should be leveraged for change.

Full Article
May 21, 2020 9:00 am 5,368 dead and counting: An investigation of state failures as crisis rampaged through N.J. nursing homes
NJ.com

More than four in ten deaths linked to the pandemic were in the state’s long-term care facilities. What went wrong?

Medical workers remain devoted to curing and easing the pain of the desperately ill during the COVID-19 pandemic. But what can be done about their pain?

Full Article
May 8, 2020 11:52 am Covid-19 Raises Questions About the Value of Personalized Medicine
The Wall Street Journal

A group of medical dissenters argues that tailoring treatment to the genetic profiles of individuals, a longstanding goal for researchers, is less important than the old-fashioned public health measures being used against the pandemic.

Full Article
April 22, 2020 9:00 am The Pandemic’s Hidden Victims: Sick or Dying, but Not From the Virus
The New York Times

As the coronavirus overwhelms the health care system, people with other illnesses struggle to find treatment.

Full Article
April 10, 2020 9:00 am Why I Support Age-Related Rationing of Ventilators for Covid-19 Patients
The Hastings Center

A 71-year-old bioethicist explains why he considers rationing mechanical ventilation based on age to be one morally relevant criterion.

As the coronavirus pandemic fills medical beds, saps supplies of lifesaving equipment and protective gear, and exhausts clinicians, ethics experts will be on hand to help hospitals make tough choices. At the heart of the matter is a question: How do you choose between patients when allocating limited resources?

Even in a crisis, doctors should not abandon the principle of nondiscrimination.

Full Article
March 21, 2020 10:53 am Ethicists agree on who gets treated first when hospitals are overwhelmed by coronavirus
Quartz

As health care systems are overwhelmed with more patients than they can feasibly treat, medical personnel are forced to decide who should get the available ventilators and ICU beds. Quartz spoke with eight ethicists, all of whom agreed that in such dire situations, those who have the best chance of surviving get priority. Despite the unanimity, all agreed that this decision is far from easy and should not be taken lightly.